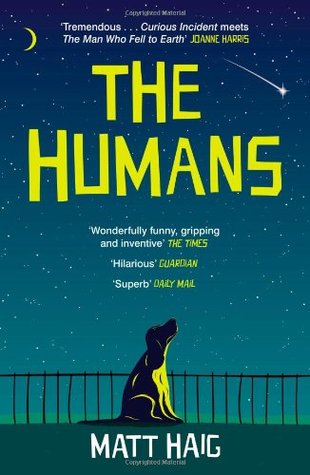 I listened to the audiobook: The Humans by Matt Haig. This is the story of an alien who comes to earth and assumes the likeness of a mathematics professor in order to prevent that professor from a mathematical discovery which may have catastrophic impact on the universe. At first, the alien is repulsed by humanity and does not understand the meaning behind even the most basic human interactions. However, as his mission extends, he is drawn into the emotional depth of human interactions. He starts to appreciate music and poetry and develop deeper relationships with the family of the man he’s disguised as.

This book was extremely amusing at times and at other times, extremely poignant. It was really interesting to hear perceptions of humanity from an (albeit fictitious) alien perspective. A lively and entertaining read, I would highly recommend The Humans. (Submitted by Seline)

Winner of the Quill and Alex Awards in 2007, the Name of the Wind is an epic fantasy and the first book in The Kingkiller Chronicle series. Told as a story within a story, the tale of the mythic hero Kvothe’s rise is equal parts exciting, romantic and heart wrenching. Author Patrick Rothfuss’ prose captures Kvothe’s journey from small child to notorious legend in grand vivid style. A thoroughly enjoyable read for fantasy fans.  (Submitted by Arvind)

Imagine overnight, dozens of huge alien ships hover above the major cities of earth. They remain in their ships, appointing a human liaison to hear their instructions and relay the message to the people of earth. It is useless to resist: they’re impervious to all man made weapons (including nuclear powers), and they have a power to block out all sunlight over an area of their choosing- from one house on a city block to entire countries. Despite their awesome power, it seems the aliens come in peace: over a period of 50 years, they solve all the world’s problems without even leaving their ships. There is no more inequality, no wars, no crime, and a world-wide one government system that sees incredible developments in technology, medicine, and architecture. Suddenly people have the ability to travel across the world for lunch, can go to university indefinitely to study all manner of topics, and form self-sufficient colonies following common interests. No one knows why the “Overlords” came, nor what they want: a common theory is that the Overlords are lost in the universe and simply bored. One day, one of the Overlords comes out of the ship, and their intentions become clear (I won’t spoil it, but their long game isn’t exactly friendly).  I found this book, Arthur C. Clarke’s Childhood’s End, to be really thought provoking and amazingly prescient: it was originally published in 1953, but could have been written last year. It was a very quick and incredibly engaging read – only about 200 pages, and a nice introduction to sci-fi, coming from someone who almost never reads it! (Submitted by Mandi)

It’s a science fiction novel depicting a time in the near future when a small number of people will be forced to essentially become refugees in space to preserve the human race because of a calamity that will make the earth uninhabitable.

This book had me riveted. The author does an amazing job of painting the picture of the events leading up to the necessity of humans having to escape to space. He develops the characters really well and includes twists and turns in the plot that are highly plausible in the given circumstances. It’s a lengthy novel at nearly 900 pages, so not for the faint of heart, but I highly recommend it. (Submitted by Seline)

Behind the Throne (Book 1)

After the Crown (Book 2)

Beyond the Empire (Book 3)

This far-future science fiction trilogy (so far) holds enticements for a range of tastes. Within the covers of each volume you will find imperial palace intrigue featuring some truly nasty villains, action-packed fights and wide-screen space battles, and complex characters negotiating interwoven relationships and learning more about themselves than they might want to know. Whew!

Interstellar gunrunner Hail Bristol is dragged unwillingly and unceremoniously back to the home from which she fled many years earlier. Her family wants her—needs her—back, and Hail has little or no choice in the matter. Turns out she is no ordinary gunrunner. Her family is the ruling dynasty of the Indranan Empire. Hail wants nothing to do with them, for complicated reasons that become clear only later in the story. But Indrana is in crisis, and Hail is their last, best hope for survival.  She’ll need all the toughness and cleverness that she has honed in her years of surviving and thriving plying her trade in the most violent corners of the galaxy. She will also need friends—but who can she trust? (Submitted by Jim W).

A new pleasure I have recently discovered is reading books by different gender life partners writing together.  I’ve explored books in Speculative Fiction, which includes Science Fiction and Fantasy.

Writing soft Sci-Fi are my new all-time favourites, Sharon Lee and Steve Miller.  Having discovered their Liaden Universe stories last spring, I’m on my third read of my favourites of their books now, and most of my Christmas presents were their books! The intricate world building adds layers to stories which are coming of age stories, romances, space operas, and adventures. Fledgling, Necessity’s Child, Dragon in Exile, and Alliance of Equals are books available at Surrey Libraries which you can use to enter the series. The first book they wrote begins The Agent Gambit, which is available through Inter Library Loan.

On the Urban Fantasy side, Ilona Andrews is a pseudonym for another female-male writing partnership. Kate Daniels is a hard core merc with magic in her blood and a past to run from. World-building and adventure are again fantastic, and the romance is balanced with self-discovery and an appealing cast of secondary characters. Magic Bites is the first book in this series. (Submitted by Rebecca O.)

From the first page, I was hooked.  I liked it so much I actually read it aloud so others would also want to read it.  I like the short chapters and Elan’s use of language.  This book has it all, time travel, romance, family dynamics, all tied up around what would happen if an event in the past was changed by the main character.  The main character doesn’t have to wonder if he is living in the wrong timeline. He knows he is. After all, he was the one who messed it up.  Read  this book to find out why our reality is not like the Utopian future that the 1950s predicted. (Submitted by Deanna)