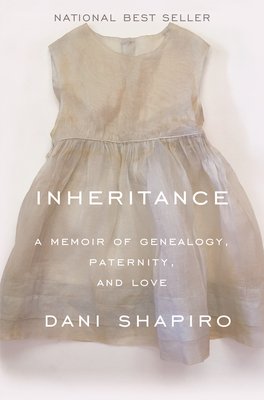 Many people in the last few years have inadvertently opened a “pandora’s box” by taking a DNA test. Some take it for curiosity, some take it because they were given it as a gift, and why not?  Then to find out that biologically they are not who they think they are can be quite a shock. This author has to come to terms that what she pictured as her “family unit” is an altogether different picture. Her journey of discovery as to the how, the why, and what to do now; is one of emotion, and trepidation.  Privacy issues, religious questions and ethical mysteries are rampant.  This memoir is a fair, honest recollection of the process this author took to make sense of her personal nature vs nurture situation and subsequent identity crisis. (Submitted by Jamie)

Behind the Throne (Book 1)

After the Crown (Book 2)

Beyond the Empire (Book 3)

This far-future science fiction trilogy (so far) holds enticements for a range of tastes. Within the covers of each volume you will find imperial palace intrigue featuring some truly nasty villains, action-packed fights and wide-screen space battles, and complex characters negotiating interwoven relationships and learning more about themselves than they might want to know. Whew!

Interstellar gunrunner Hail Bristol is dragged unwillingly and unceremoniously back to the home from which she fled many years earlier. Her family wants her—needs her—back, and Hail has little or no choice in the matter. Turns out she is no ordinary gunrunner. Her family is the ruling dynasty of the Indranan Empire. Hail wants nothing to do with them, for complicated reasons that become clear only later in the story. But Indrana is in crisis, and Hail is their last, best hope for survival.  She’ll need all the toughness and cleverness that she has honed in her years of surviving and thriving plying her trade in the most violent corners of the galaxy. She will also need friends—but who can she trust? (Submitted by Jim W).

A Series of Unfortunate Events is popular, especially among pre-teens, for a reason. At first, I didn’t think I’d like the series since it seemed too odd and dreary. However, Lemony Snicket (the pen name for Daniel Handler) has such an intriguing style of writing. The series is about three orphans who try to escape Count Olaf, a relative who attempts to steal the inheritance the orphans are supposed to receive when they grow older. While I agree with others that the books in the middle of the series are repetitive, the end gets very interesting! There are so many clues and sub-plots that the books start to feel like a mystery series, and it’s very rewarding if you read every single book. It’s a clean read that’s great for people who are willing to finish something all the way through and get lost in the mystery and adventure. (Submitted by Beatrice)

You are welcome to borrow A Series of Unfortunate Events from Surrey Libraries; we have it in different formats: books, ebooks, and audiobooks.  Check it out!