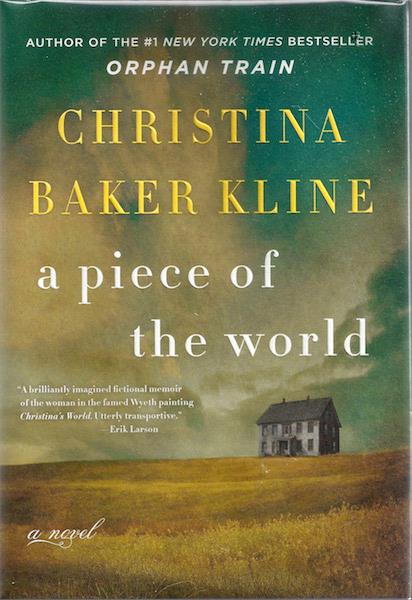 A quiet, unassuming novel that was completely excellent. “Christina’s World” is an iconic American painting from the mid-20 century by Andrew Wyeth. It’s famous for it’s so-called “magic realism” style. At first glance, the girl in the painting is simply sitting in the grass, titled towards the farmhouse. Upon closer inspection, however, there is a sense of eeriness and foreboding: the girls’ arms are too thin and sickly, she is twisted at a wrong angle, the farmhouse is ghostly, and the placement of her hand on the grass suggests both yearning and escape.

The painting triggered many questions, but most of all, people asked this: who IS Christina?

Kline has written a beautifully wrought story here, about Christina’s life, historical American farm life, and living life with a disability. She has balanced these elements of the story so well. I was blown away by the depth of emotions conveyed in her elegant, concise language. The research and facts behind the fiction are clear – everything is believable. Not only does the truth come through, it was fascinating.

Such a wonderful, enjoyable, interesting read. Just like the original painting, there is so much more to Christina Olson’s world going on beneath the surface; beyond what you see at first glance. (Submitted by Veronica)

Sadly, I only learned of author Brian Doyle, when reading his obituary recently. A writer of adult and young adult fiction, of novels, short stories, poetry and essays, Doyle lived in Portland, Oregon, where he was also the editor of Portland Magazine. Finding out that Surrey Libraries owns a number of his books, I checked out the novel Mink River.

I loved his writing style – he brings the lyricism of a poet to his fiction. His trademark is long flowing sentences without punctuation. This takes some getting used to at first, but I came to love the style and his use of words.

Normally the magic realism genre is associated with Latin American writers such as Gabriel Garcia Marquez and many others, but Doyle’s style is a kind of magic realism set in the Pacific Northwest. There are many great characters that you fall in love with, from a crow who talks (and philosophizes), to two old guys who make up the local Department of Public Works (which doesn’t limit itself to roads and drains, but haircuts and counting insects and generally watching out for the welfare of everyone in their little community). Doyle weaves in aboriginal lore, as well as Irish language and myth (one character is a transplanted Irishman). While Mink River has a large assortment of fascinating characters, really the main character of this book is the town of Neawanaka, with Doyle weaving various storylines together in his portrayal of this fictional town on the Oregon coast.

The affection and off-beat humour of Doyle’s writing reminds me of classic writers that I’ve enjoyed such as Kurt Vonnegut, Joseph Heller, and Tom Robbins. I’d recommend reading this book, and other fiction, essays and writing from this author. (Submitted by David)